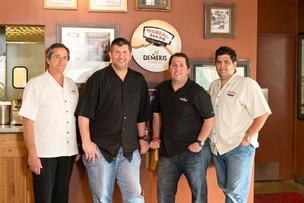 After serving up old-school barbecue to Houstonians since 1964, the Demeris family has shut down its flagship Hempstead Highway location and is set to relocate nearby with a redesigned eatery that includes some modern touches.

The Demeris Bar-B-Q restaurant, at 1702 West Loop North between Hempstead Highway and West 18th, is slated to open on June 18.

While the eatery will still feature the family’s signature barbecue dishes, the design will break from tradition by adding an outside patio, a drive-thru, private dining room and full-service bar.

“Over the years, the restaurant business has evolved to a place where people like to lounge around for hours or catch a game with their buddies,” said Yonny Demeris, co-owner of Demeris Bar-B-Q. “So, we added a bar for our regulars and people who just may want to come in to escape the traffic.”

Billy Vlahakos, the restaurant’s other co-owner, said adding the drive-thru was a natural fit. “We can turn orders around quickly and it’s another convenience for our customers.”

The family was forced out of its well-known shopping center location at 9552 Hempstead Highway by the Texas Department of Transportation on May 30. TxDot is planning a highway expansion in the area and took the building through eminent domain.

“We were there for over 30 years, so we know what people in this area are looking for,” said Demeris. “We’ve seen a lot of footsteps come through that location. Our new location is a stone’s throw away and much more customer friendly.”

In another sign of the times, the new restaurant will be open seven days a week, unlike the family’s other two barbecue restaurants at 2911 South Shepherd Drive and 6722 Marinette St.

All of the employees of the former location will move to the new restaurant, Billy said.

During the past three decades, Demeris Catering has experienced rapid growth and is the third-largest caterer in Houston, according to the Houston Business Journal’s Book of Lists. With the progress of the catering division, the menu has grown to include a variety of tastes.

“We’re hoping the opening of this new restaurant will start to catapult the restaurant side of our business,” Vlahakos said. “We’re going to take them one at a time, but we’re looking to open multiple locations throughout town.”

While the Houston restaurant scene is fiercely competitive, the Demeris family has remained a mainstay while other upstarts have come and gone.

The family owes its success to not allowing pricing pressures to determine the quality of food they purchase, Vlahakos said.

“You can’t underestimate the power of a family business,” he said. “We have aunts, uncles, cousins and siblings around here to make sure we’re doing everything right.”

I’ve heard Houstonians complain about the quality of barbecue in the Bayou City, especially those who have sampled traditional fare in Central Texas, or even the Dallas area.

While national chains have struggled locally, the Demeris, Goode and Pappas families have succeeded by sticking to the barbecue style that was favored by locals years ago.

The Pappas family, which operates about 15 Pappas Bar-B-Q locations in the area, last month reopened the doors of the original Pappas Bar-B-Q in downtown Houston after an extensive remodel. The location, at 1217 Pierce St. at San Jacinto Street, has been serving up slow-smoked Texas barbecue since 1967.

And yes, the newly renovated restaurant features patio seating and a drive-thru.